It was a race against time the moment I awoke. I set my alarm last night to wake me later then I wanted. I needed to catch a train in Colombo and I had no time.

I quickly grabbed my items that were charging the night before and started placing them in my already packed small backpack. I realized that my backpack was too small for me to carry what I needed. I hastily switched my things to my large backpack.

I grabbed my bag and headed out the door, forgetting to grab my prepared breakfast. The door however is secured at the house like Fort Knox which I have never (un)secured before. More time lost. I’m thinking, catching this train is never going to happen. I start walking up to the main street when a 3-wheeler pulls up. I’ve been saved on time! I jump in and tell him, “Train station! He shakes his head and we’re off. The ride over I’m thinking I just might make it. 10 minutes later he starts pulling into the train… wait nope. It’s a hotel. A hotel? There goes my train.

I try to explain further which ends up turning into a pathetic game of charades. I see a hotel guy and call him over. “English?” I ask. He says “yes,” and I ask him to tell my driver I need to go to the train station. He did and we’re off again.

We pull up to the station, which I have never been to before. Everything is written in Sinhala and nothing is English. I go up to what I think is the ticket counter and ask for a ticket to Unawatuna. Thankfully he’s the guy. He hands me a ticket and points to the platform I need to be on.

The train arrives minutes later and I’m on it!

Trains heading south in Sri Lanka from Colombo hug the coastline. Along the way you see small house and shanty villages all along the way.  I start to realize that the poor have some of the best waterfront property that any America would die for. Which is what happened to 30,000 people that died in the 2004 tsunami. 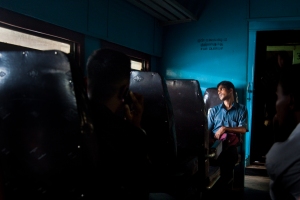 The train is simple as it can be. The seats barely have any cushion, and the cars look as if they are over 50 years old. All the rails and racks are made of wood. There are no doors and many people hang off the side of the train cars when they are jammed pack. I left on the 6:40am train to beat the crowd trains. I have a bad seat for taking pictures but I was too tired to try to move to a better one. Maybe my next train ride will allow for some nice images.

After we went to the Gaul train station the train started heading back. I didn’t know what was going on. Did I miss my stop? I was told to get off at the next stop, which I did but it was the wrong stop. I walked a quarter of a mile to the main road. I asked a man on the street which direction Unawatuna was. He pointed and I jumped on the next bus I saw and hoped it would take me to where I needed. I have now found myself on a Latino inspired bus and passengers. The first I have seen on the island. I ask around me and I eventually find one guy who says the bus will get me to Unawatuna and that he’ll tell me when to get off. I heard that before on the train….

I jump off the bus and there I was in Unawatuna. I walk down the main stretch and find the beach. It’s really nice but that’s on tomorrow’s itinerary. I eventually find my low budget but nice room at a guesthouse that my travel-guide suggested. It’s tucked away from the beach but it’s pretty nice. For 30 bucks a night you can’t go wrong. I’m staying for two nights.

I relaxed for a few and then I locked my backpack up to my bed and headed out the door for Fort Gaul.

I walk back out to where the bus dropped off and grabbed the next bus. I hope this one goes to Gaul. I hoped for the best and 15 minutes later I was standing outside the gates of Fort Gaul.

Fort Gaul is a Dutch fort built around 1667 when they controlled the island. Inside the extremely large ocean lined fort walls, has about 400 homes, churches, mosques, temples, old commercial and government buildings. Fort Gaul was spared from the tsunami because of its intensely large walls that kept the surge at bay. Much of the area around it was less fortunate. 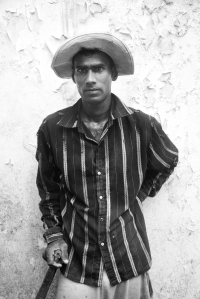 A man working in construction in Gaul Fort, Sri Lanka.

I walked around a bit and pop into Pedlars Inn Cafe for some freshly squeezed mango juice and a great lunch. After I was done I wondered through town, finding myself photographing the workers working on different parts of the town. I was fascinated by the cobble stone brick layers and the backbreaking work it must be.

I also came across some construction workers laying foundation for the back of a home. The front façade and a small area were left, which is where they were mixing concrete on the floor. I saw this somewhere is before in Sri Lanka.

They make small batches of concrete one at a time. I assume they don’t have plants that pre mix and deliver it. It might also be because of the location, heat, and cheap labor. I walk in and introduce myself, talk a bit and then ask if I can shoot.

After that I ventured on when I came across an 80 year old Muslim man. He showed me a part of his Masque and was telling me a little bit about him. He told me he was their equivalent of Eagle scouts in Boy Scouts. Being an Eagle Scout myself we had fun remenouse our scouting experiences. I photographed him and moved on.

I parked myself on a park bench high on one of the fort walls and sat down. Two young men came by and sat next to me. They started questioning me about which country I was from and about photography. We end up talking for almost 20 minutes until a downpour ripped through the fort. We took cover and after it was done I made my way towards my guest house in Unawatuna.

School kids I spoke with in Gaul Fort

On my way to catch a bus, I found the local bay where the fishing sailboats were coming in with the days catch. They used twenty men to pick up and drag the boats up the sand to dock them. A few dozen yards away they started selling the fish right there on the street. I shot a few things but I got a bad instinctual feeling so I left.

It was rush hour and the busses were packed. There was no way I was catching a bus so I had to pay for tuk-tuk to take me back to my room.

When I got back to my room I started to prepare to download the day’s images like I usually do. That’s when I realized I left my card reader in my other backpack. I have no way of downloading the images now. I have very little card space right now and I have many days before I head back to Colombo. I’ll have to figure out a solution tomorrow. I might have to go back into Gaul to find one, which was not on my agenda.

Not sure if I would have won the Amazing Race today, but it was still an amazing day.