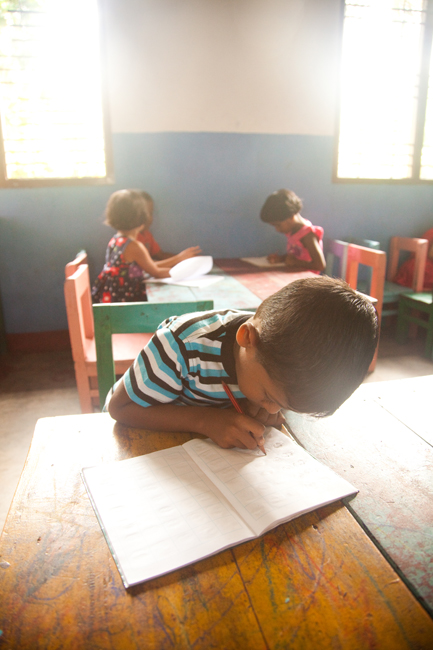 Today was a rest day at my friend’s house in Colombo catching up on emails and sorting my images.

As I work on my computer, I keep seeing my photos from a trip I took a few days ago. I visited a preschool right outside of Hikkadua. I was there documenting a school for a church in Colombo who has helped build and raise money for many schools across the country.

I arrived at the preschool just before 8:00am. I was greeted by the Principal at her home, which is nestled a few feet away from the colorful school. I walked into her humble home and was offered tea right away.

In the background I could hear the radio playing. It was in Sinhala but I could tell it was a comedy show by the tone of voice and laughing. It might have even been a prank call segment like they do in the states.  So far, in Sri Lanka I have only seen a few TV’s. This was the first I have seen or heard a radio.

As I sat waiting for my tea I was told that not many students were going to be in school today because of the rain. I have found that many Sri Lankans hate the rain, as much as people in Washington, DC do.

Tea was delivered and they asked to see some of my work. Since I had my laptop on me, I showed them a slide show of my work from the states. After the presentation, they were really excited and thankful for me to come photograph their little piece of the world.

After my 2-cent show I prepared my photo gear and we walked a few yards to the school next door. I walked in and found that most of the students had already arrived. They were all standing in a circle singing songs in the foyer, which was draped with celebration flag-streamers. Moments later one-by-one each child walked into the center of this brightly colored blue room and recited phrases. One was in Sinhala and the other was in English.

In 2007 this area was struck by the tsunami. The principal’s family agreed that if the church helped build them another house for their parents and to help fix theirs that they would donate part of their land to build a school. She now is the principal where her twin daughters attend as well.

Children here start learning English along side with Sinhala at a very early age. The government provides education for free. However, many schools may charge a fee to attend their school. Many times those schools teach English and most every Sri Lankan parent wants their child to learn English. This is a preschool so the government does not pick up the cost. Monthly tuition is about 500- rupees.

The school has five rooms: A large foyer, two large classrooms, a recreation room of sorts, and a teacher’s office. The children split off into two groups depending on their age and move into one of the two classrooms for the remainder of the day. Each room is painted a beautiful blue and white that is basked by light coming from the glassless windows near by.

Many of the girls are dressed in colorful jumpers and the others wear T-shirts and pants. I smile at one boy’s shirt that reads “U.S.A” prominently across his shirt. They watch me with curious eyes, not sure what to think about the man with the camera.

As class begins in each room I begin to jump back and forth between classes photographing the children and teachers busy working on the respective work. One class was coloring a picture of a penguin. Each student is taught which color goes where and they are expected to color that way. No pink heads and sky blue bodies in this class.

I look around at prior projects and I notice their previously colored lion pictures reflect the same natural colors. I was told that unlike the west where “free thinking” is allowed, here in Sri Lanka they teach and guide students, “the right way.” I also believe that with few books and little to no computers or TV in their young lives, this very well could be the only way they can see and learn what a penguin or lion really looks like. It’s more of a teaching tool then it is for just coloring fun. 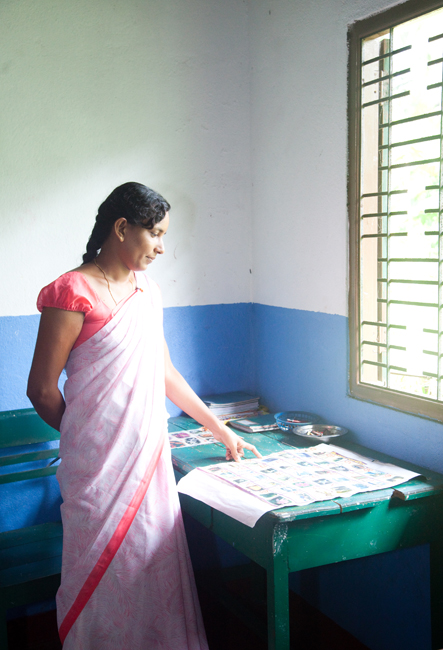 The children in the other classroom are quietly and diligently working in their paper workbooks, where they are practicing writing Sinhala letters. A young teacher in a beautiful pink sari leads the class from a small desk in the front of the class. She shows them, from a paper poster, the letters they are writing and pictures of objects that start with that letter.

After their studies they go outside for a quick break to sing the Sri Lankan national anthem in the small schoolyard next to the school. The Principal told me that the land next to them was for sale but was very expensive. She deeply wished they could acquire the land so that they may build a playground for the children to play.

After the national anthem everyone heads back in to wash their hands before lunch. All the students bring there own lunch, along with a thermoses to drink from throughout the day. Some kids sat quietly at there table without any food while the other students ate there’s.

Since I have been in Sri Lanka I have learned to go long stretches of time without food, because of travel, time, and cooking conditions. I figured today would be one of those days, however the principal made me some lunch! Yeah! It was an egg sandwich… crap! Now if you know me, you know I despise eggs. I have a slight ovaphobia with them. This is a nightmare.

I put on my best one-man-show and start to eat the one thing I hate the most. I made it look like it was the best sandwich I had eaten in a very long time. It was cruel self-torture.

Everyone went back to work after finishing their lunches. One class worked in their books, and the others did some freehand drawings of local flowers. I went back to photographing them for a little while longer before my taxi arrived to take me back to Hikkaduwa.

Nothing grounds me or puts my life into prospective than spending a day with children. I feel if everyone spent some time seeing life through the eyes of a child, you would find the world would be such a simpler and happier place.