On a sunny day in March last year, I spent several hours, along with a writer, at Arlington Cemetery.  We were following Bill Vogelson, a retired 20-year Air Force veteran, who is one of eight cemetery representatives who between them oversaw 30 funerals on that day. On average the cemetery conducts 27-30 funerals every day, and almost 7,000 each year. 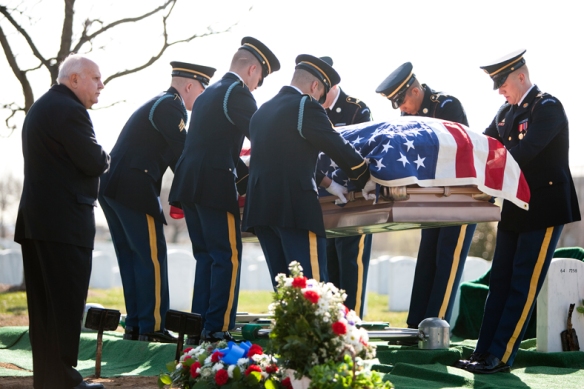 Cemetery representatives are with the families from the beginning to the end of the burial process. They were most likely the ones who answered the first phone call the family made to Arlington, and they will be there until the lowering of the casket. From organizing full military honors, to helping a physically shaking woman place a rose on a family members coffin, the cemetery representatives are there to help. 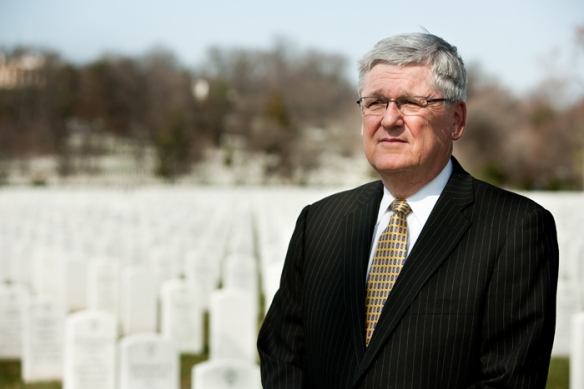 I found that Bill’s job wasn’t just to oversee some paperwork and make sure a casket goes through a procedure and into the ground. He was there for the family, physically and emotionally. He was there to work out the details, allowing the families to focus on their grief. 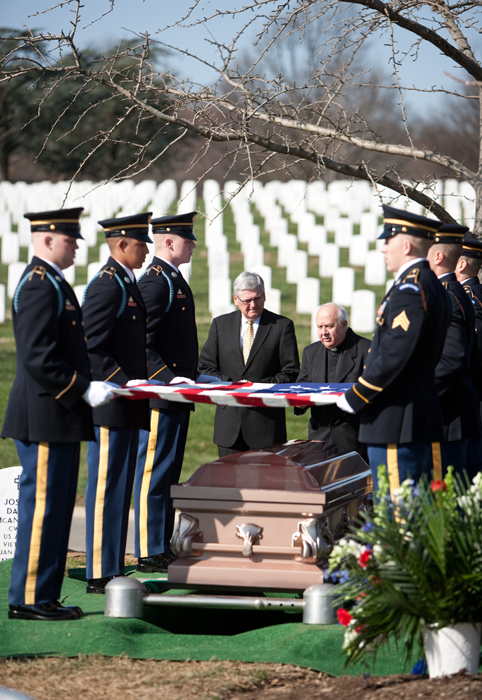 He’s the family’s beacon of light, to help get them through the saddened fog that comes with burying any loved one. I found Bill not only to be representing Arlington Cemetery, but he was there representing the armed services, and us – as fellow Americans and as fellow humans.

When the family and other guests arrive for their loved one’s service at Arlington, they are brought to one of its four main family rooms where they will meet their cemetery representative.

After meeting with the family, and waiting for the rest of the mourners to arrive, Bill will take a quick drive out to the gravesite. He checks to make sure the interment crew has prepared everything, and that the site is ready for the family. 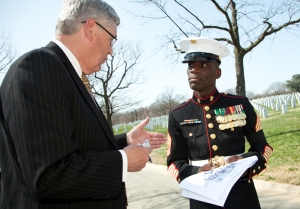 I watch Bill as he straightens chairs, examines the ground cover, and double-checks the temporary headstone. He’s looking at every detail trying to make it perfect. He prepares each funeral like he was burying one of his own.

After checking the gravesite, Bill will then meet with nearby soldiers who carry out the military honors. A standard military honor includes a casket team, firing party, and bugler. All of the arrangements and last minute details are all unseen by the families.

Once Bill feels everything is as it should be, he heads back to the gathering family and mourners. He coordinates the procession and leads everyone to the gravesite for the burial service. 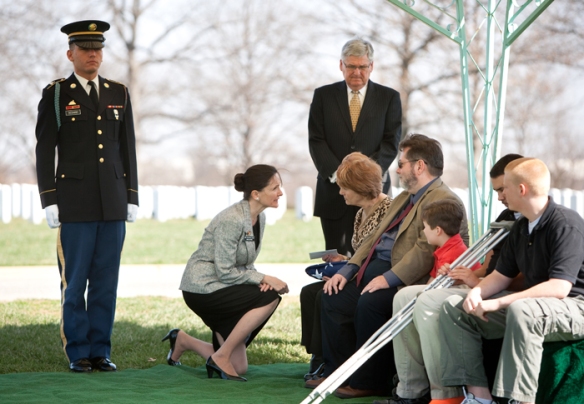 The cemetery representatives try to give each family the feeling that their service is the only one taking place that day. With multiple burials happening at once, they often have to coordinate with each other so processions routes do not encounter one another. 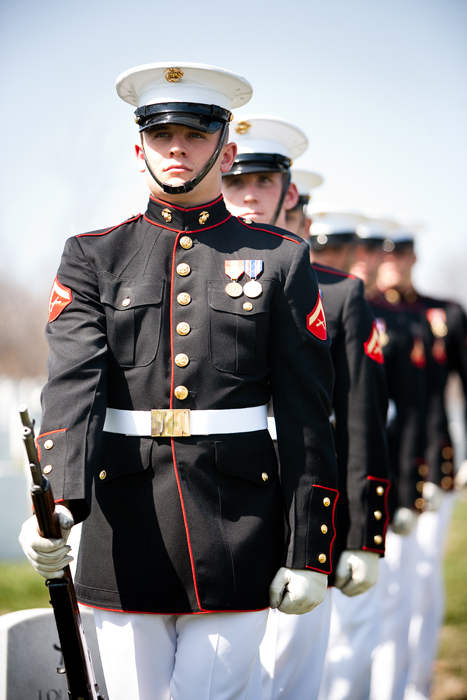 It’s nearly quiet as I gingerly walk around photographing the first service taking place. The sun is shining and the air is crisp. There’s a calming effect from the soothing voice of the minister leading the service. As I photograph, I’m concentrating on being exact, unnoticed, and respectful. Then shots rang out from the firing party. It makes me jump. It’s incredibly loud. I’m frozen in place and motionless. The second volley is fired.  My heart is pounding and I’m breathless. The third and final volley is fired­­–21 shots in all. The sound echoes off the rolling hills­. I didn’t get any photos; my body wouldn’t let me. Then Taps began to play. 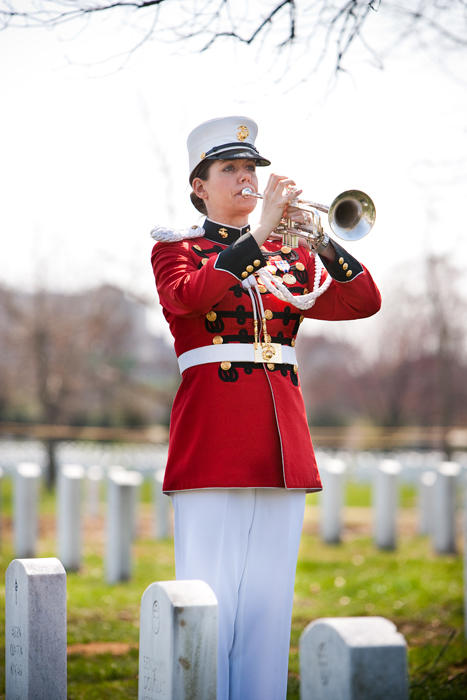 Taps to me is a mournful hug that embraces you after the volleys shock your heart and senses. I also believe Taps brings a sense of closure to the current day, but also brings optimism for new days ahead.

That was the first service of the day, but every service played out the same way for me. Even though I knew those rifle shots were coming, my reaction was always the same.

During the funeral service Bill stands near the family always at the ready. I watched him as he helped a physically shaking woman walk up to a coffin to pay her respects.

As the families leave the burial site Bill always stands guard next to the coffin. With his hand on his heart, while the family drives away. Bill stands there until the interment crew comes to lower the casket and to finish the burial. 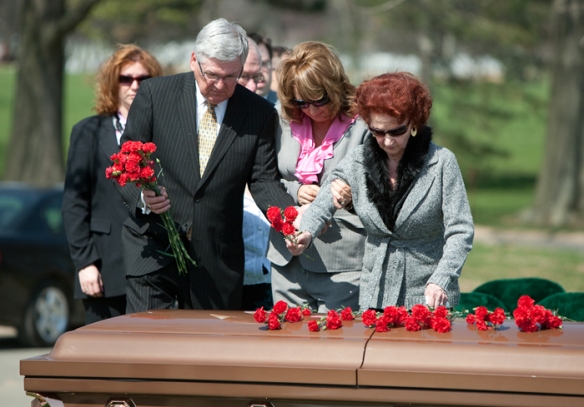 As the interment crew fills in the now occupied grave, Bill drives back to the main building to meet a new family and to start his process over again. Once the interment crew is done filling the grave. They move a few feet over to dig down once again.

Catlin Gibson is the amazing writer I teamed up with that day. She currently works for the Washington Post. You can read Catlin’s story called The Last Full Measure to learn more about Bill Vogelson and Arlington Cemetery.

In the course of the day the three of us traveled nearly 20 miles within one square mile of the cemetery. As we were driven around the 624 acres of hallowed ground, I was taken aback by the sweeping hills of white headstones and the sheer number of burials that have taken place there. 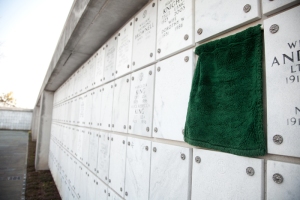 For many years I lived only few minutes away from Arlington Cemetery, and I would drive-by nearly every day. However, I never really absorbed the magnitude of the place. Even as a visiting tourist you typically only see a fraction of white headstones that keep rolling through pristine green valleys.

I am then reminded that Arlington Cemetery only represents a portion of service burials. Many veterans choose not to be buried in Arlington but rather to be laid to rest closer to home, like my Grandfather. 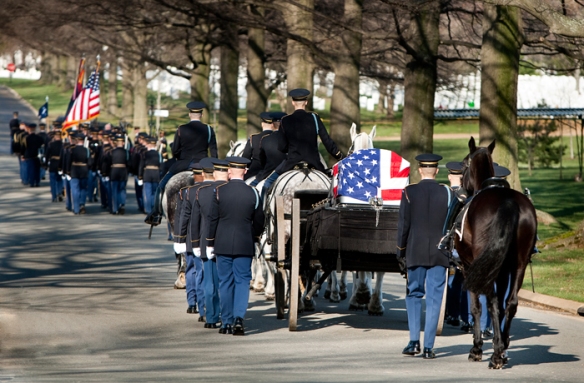 My day spent in Arlington gave me a deeper appreciation and awareness for our military, my family, and our country going forward. It also gave me a new respect for the people like Bill, who help the living mourn and bury their loved ones.

“They shall grow not old, as we that are left grow old:
Age shall not weary them, nor the years condemn.
At the going down of the sun and in the morning,
We will remember them.”
~Laurence Binyon